What a difference 7 centuries make

In the old days, specifically during the plague, some poor people were boarded up inside their houses and left to die. Now we just access the internet and there you go, you can have your far distant grandchild read to you.

The story, according to her, was about a fat dude who lived at the top of a beanstalk. I remembered it as a giant, but there you go. Different interpretations and we arrived at the same place in the end.

Isolation is difficult, but I do get to see my family as I help with the reading using what I learned to be a tutor in the local school. I miss my pupil but I lov

e working with my grandchildren, either here in town or via the wonders of the modern world.  I don’t have to wear that silly mask, which you think about it, was a foreshadowing of our 21st Century social distancing.

You can buy one at Amazon if you’re interested. I think it’s going to be everyone’s favorite Halloween disguise when we come out on the other side of this 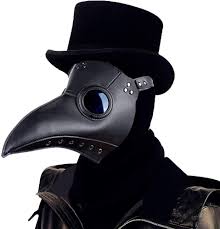